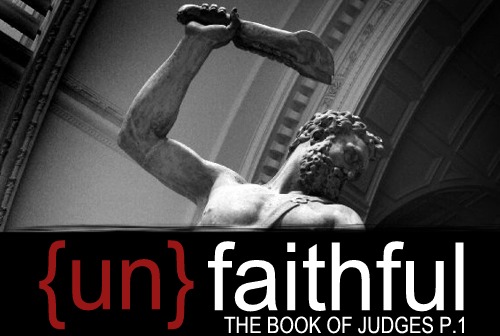 It feels like we are living in the middle of the book of Judges.

Most of the story of Judges takes place on a humungous-gigantic-jumbo scale with major rebellion, powerful judgments, corrup governments, brutal oppressors with big armies, and over-the-top heroes with over-the-top egoes.  Some of the most famous "characters" in the book of Judge become known for some of the most infamous things.  And with the death of each hero comes a new cycle of rebellion, a new judgment, and another deliverance by a new "judge".  But instead of repenting, instead of becoming more faithful as a result of God’s faithfulness, the people keep getting worse with every cycle and, by the end of the book (400 years), they are more unfaithful, more dirty, and more hopeless than when they started.

The book paints a dark, violent, and wicked picture of the culture.  Yet, at the same time as the book of Judges we have this in Ruth 1.1-5:

In the days when the judges ruled there was a famine in the land, and a man of Bethlehem in Judah went to sojourn in the country of Moab, he and his wife and his two sons. 2 The name of the man was Elimelech and the name of his wife Naomi, and the names of his two sons were Mahlon and Chilion. They were Ephrathites from Bethlehem in Judah. They went into the country of Moab and remained there. 3 But Elimelech, the husband of Naomi, died, and she was left with her two sons. 4 These took Moabite wives; the name of the one was Orpah and the name of the other Ruth. They lived there about ten years, 5 and both Mahlon and Chilion died, so that the woman was left without her two sons and her husband.

This is the beginning of what amounts to a love story.  It is not just a love story between a young woman and man, but between a God and His people.

The story of Ruth is a story within the story—a glimpse into what a sovereign and good God is doing to accomplish his mission, not despite the sinful choices of men, but in fact through them.  The story is not big, it is small; the characters are not amazing, they are very ordinary.  It is a story about one small family, and one young non-Israelite widow, serving as light of hope in all of the darkness of Judges who ultimately leads us to Jesus Christ the light of the world.  When all things appear hapless and hopeless, God is faithful.

We can all read online the "story" of our current state.  But let remain curious as to what other story God is also telling which, in front of such a dark background, will appear brighter than ever.